(to get a translation, click on the mouse's right button>translate)

resurfaces and helds an important interview (thanks for the words Crystal and Lee)
- Me and the magical mystery of Felt, by Nick Triani (One Quart Magazine)

.Here's what's included for Golden Tickets owners (Golden Ticket holders will need to be available from 3.30pm on the day of the Lexington show):
- Entrance to the evening show at The Lexington, London N1.
- An exclusive, private screening of the film ï¿½Lawrence of Belgraviaï¿½ at an intimate theatre within walking distance of The Lexington.
- Following the film presentation, Q editor Ted Kessler will be joined by director Paul Kelly and Lawrence for a Q&A session.
- An A3 print of the poster used to promote the show.


February 2018
.In this site's Felt Forum we've got fresh news from planet Lawrence. Take a peek, leave a comment:
Lawrence interview on BBC6, already some reviews on the Felt reissues and more more more on the 14th april

: Go-Kart Mozart will be playing at The Trades Club, Hebden Bridge, on the 14th april.

.For Future events, please leave your name and email address in here www.4533.co.uk and theyï¿½ll be in touch soon with any news of future events.
I can guarantee you won't regret.

.Also, on the bottom of this page you have my MAILING LIST. No Spam, no crap. Just Lawrence, ok?

Musician and writer JC Brouchard (wrote Ballad of a fan, remember?), wrote wonderful posts and updates regarding Lawrence and Felt. Pay a visit to his FB page. 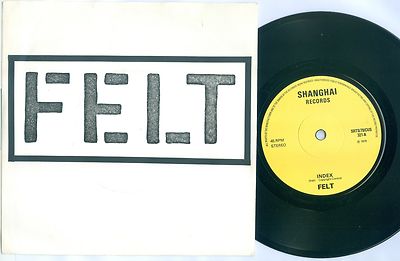 .So, check this cover. Another variation of Index cover

.More pics taken from the Felt book in here

.Do you want a 'Lawrence T-Shirt'? buy it here at Heathers!

.July 2014 sees the release of an instrumental album he's made with Martin Davies (from Fly) called 'Future Forest' going under the name 'FILMONICS'

.And here's the rest of the best: I arranged a Q&A with Marco, opened to all you Felt/Fly/Filmonics fans!!!